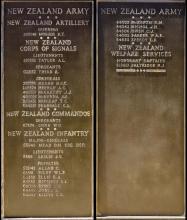 Bourail is on the western coast of the island of New Caledonia, which lies approximately 1600 kilometres north of New Zealand. The Bourail Memorial is situated in Bourail New Zealand War Cemetery, which lies about 9 kilometres south-east of Bourail, on the main road north and east of the Nera River, which flows into Bourail Bay. The entrance to the cemetery is on the south-western side and leads, through a terrace adjoing the Records building, to the wide central avenue which curves between two double rows of graves to the Cross of Sacrifice erected on a raised circular platform at the northern end. The Memorial stands behind the Cross of Sacrifice and commemorates members of the New Zealand Land and Air Forces and Merchant Navy, and members of the Western Pacific Local Forces who died during operations in the South Pacific area, and who have no known grave. The men of the Fiji Military Forces who died in this campaign and whose graves could not be located or maintained, are commemorated on the Suva Memorial at Fiji. The Memorial consists of a curved screen wall with pierced wing walls of brick. The names are recorded on 12 bronze panels affixed to the main wall; the first nine bear the names of New Zealanders, and the remaining three those of men of the Western Pacific Local Forces. Above the panels is the following inscription: 1939 - 1945 THESE OFFICERS AND MEN OF THE NEW ZEALAND ARMY, THE ROYAL NEW ZEALAND AIR FORCE AND THE WESTERN PACIFIC LOCAL FORCES SERVED AND DIED IN THE SOUTHERN PACIFIC ON LAND AND AT SEA.

COASTWATCHERS - BOURAIL MEMORIAL New Caledonia
From 1941 until the end of the Second World War New Zealand Coastwatchers reported on enemy shipping, aircraft and troop movements from Campbell and Auckland Islands in the south to the Gilbert (Kiribati) and Ellice (Tuvalu) Groups in the north.
Although the coast watching service was primarily the responsibility of the Navy, the majority of those who were actively involved were servicemen from the Army and radio operators, who were civilians, from the NZ Post and Telegraph Department.  Coastwatchers endured the cold in the south and the heat in the north, as well as the isolation, intermittent supplies and risk of illness. Those Coastwatchers who became too ill to administer to themselves radioed in their symptoms and in return received suggestions for further treatment. In addition there was the danger of enemy capture or of natural disaster. In February 1942 a hurricane struck Suvarov Island in the southern Cook Islands and the three New Zealand Coastwatchers there survived the tidal waves which swamped the island, highest point 14 feet above sea level, only by climbing a tree. Some of the Suvarov Islanders were not quite so lucky, being swept into the lagoon by the first wave but then swept back on land by a later wave.
The coastwatchers radioed for help using a radio made of salvaged parts – help arrived five months later in July. On 11 December, 1941, in the northern Gilbert Islands, the first New Zealand Coastwatchers were captured by the Japanese. Although questioned, particularly about the defences of Fiji, they were reasonably treated and shipped to Japan where they remained in various POW camps until the end of the war.
The Japanese invaded the southern Gilbert Islands in September 1942 and over a period of weeks the coastwatchers progressively went off the air as their island was overrun. In all, 17 New Zealand soldiers and radio operators were captured and taken to Tarawa where they were callously treated by their captors. Along with several European inhabitants of the island, they were tied to coconut palms with telephone wire for three days whilst they awaited interrogation. They were imprisoned in the “lunatic” enclosure at the local hospital and forced to work on the wharf at Betio.
On the 15th October, 1942 at Betio, apparently in retaliation for the American bombing of Tarawa and the attempted escape by a civilian, all 17 along with two Australians and three other British subjects were executed by beheading and their bodies thrown into pits.
In December 1942, all the civilian Coastwatcher radio operators, including, posthumously, those executed at Betio, were given military rank. This “involved administrative problems since dead men are unable to sign the necessary attestation papers. However, the required regulations were promulgated entitling dependants to pension rights and other privileges of men of the services.
“All those killed were later mentioned in despatches—Privates R. A. Ellis, R. I. Hitchon, D. H. Howe, R. Jones, C. A. Kilpin, R. M. McKenzie, J. H. Nichol, C. J. Owen, W. A. R. Parker and L. B. Speedy; and the operators, all of whom were given posthumous military rank—Lieutenant A. L. Taylor, Corporals H. R. C. Hearn, A. C. Heenan, J. J. McCarthy, A. E. McKenna, T. C. Murray and C. A. Pearsall.” They are all commemorated on the memorial at the Bourail New Zealand War Cemetery, New Caledonia and on a memorial dedicated at Betio, Tarawa, Kiribati on 11th November, 2002.
The seven New Zealand radio operators are remembered on a decorative memorial scroll, a copy of which is proudly displayed in the historic Musick Point Memorial Radio Station in Auckland. The original is in the New Zealand National Archives. Also remembered is the New Zealand radio operator from Ocean Island, Sgt R. Third, who died in captivity, and the British administrator on Tarawa, R. G. Morgan, who escaped into the bush and reported on Japanese military movements until his capture in September 1942 and execution along with the others on 15th of October 1942,
Source - Gillespie, Oliver A., The Pacific, Historical Publications Branch, Wellington, 1952. Part of “The Official History of New Zealand in the Second World War 1939-45”.

The island of New Caledonia was annexed by France in 1854. In 1942 the Allies used the island as a training ground for jungle and island warfare, and it was here that New Zealand forces prepared for the Solomon Islands campaign. The Headquarters of the South Pacific Command was established at Noumea, the capital, which became the principal United States base for the campaign and the largest forward Allied military and supply base in the South Pacific. No.4 General Hospital was set up in Dumbea Valley, nearly 25 kilometres from Noumea. Bourail, on the west coast of the island, was the Headquarters of the 3rd New Zealand Division, which began to arrive in New Caledonia towards the end of 1942. Brigade Headquarters and staging camps were disposed along the main arterial road on the western side of the island, where the principal defences were concentrated and where airfields were built to link the island with the battle zone and the bases in Australia, New Zealand, Fiji and other places in the Pacific.