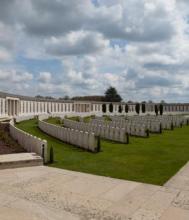 Despite a cool and wet spring in the northern hemisphere, the photographs which the New Zealand War Graves Trust contracted for in New Zealand have been collected from Belgium. This part of the project was possible thanks to funding from The Trusts Community Foundation and from the Four Winds Foundation. This scene of so many World War I battles has graves and primary memorials (where there is no known grave) of more than 5000 New Zealand casualties.

A majority are in three cemeteries, either in graves or on memorials: 828 on the Messines Memorial, 1281 on the Tyne Cot Memorial, 192 in Tyne Cot Cemetery and 378 on the Buttes Memorial. The balance, 2353, are in 129 smaller cemeteries—some administered by the CWGC and others in local/town graveyards. These completed photographs which are being progressivley uploaded to the New Zealand War Graves Trust website, were collected in a little over three months.

Among the many World War I battles in Belgium, there were notable actions around Ypres and Messines and the 1917 Battles of Pilckem Ridge, Langemarck, Menin Road Ri

dge, Polygon Wood, Broodseinde, Poelcapelle and Passchendaele, for example. The website greatwar.co.uk notes that there are 11,956 graves of Commonwealth servicemen in Tyne Cot Cemetery in Belgium, the largest British and Commonwealth cemetery in the world. Of these graves 3,588 are identified. The remains of the other 8,368 servicemen buried in the cemetery are known not by name, but only by the fact they served with Commonwealth forces.

Funding from SkyCity Auckland Community Trust allowed the collection of photographs, gathered in the northern summer 38-degree heat,  of all 2348 casualties on the Gallipoli peninsula. The work continues in collection of images of war graves from the Somme and northern France where thousands of New Zealand casualties are located.

Funding from First Sovereign Trust has allowed the start of contracted supply of photographic images from the area of the Somme, a First World War battleground. Our project aims to obtain photographs over two summers of a total of 8314 casualties in France, including 534 serving with Allied forces, mainly Australian and British, remembered in 466 cemeteries and on memorials.