Benghazi Cemetery To Be Restored 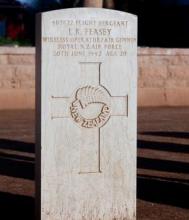 The NZ War Graves Trust photographer has taken photographs of the graves of the 11 New Zealanders who served with the New Zealand forces and one with the Australian forces who are recorded as being buried in the Benghazi War Cemetery.  They are:

The Commission sought a detailed report about the damage in both cemeteries where headstones were broken and disfigured.
“Both cemeteries will be restored to a standard befitting the sacrifice of those commemorated at Benghazi, but this could take some time because we will need to source replacement stones,” the commission says. “We will also need to be sure that it’s safe for the detailed work to be carried out, but in the meantime we will ensure that temporary markers are erected over the graves. We have no reports of any maintenance staff being injured in the attack.”