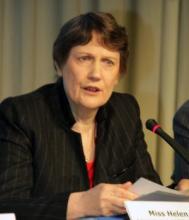 The memories of war and aspirations for peace underline the mission of the newly refurbished In Flanders Fields Museum in Ieper, Belgium. There is a New Zealand connection-- many New Zealanders are buried in this area.

There is a more recent New Zealand connection with the relaunched museum. Helen Clark, former New Zealand Prime Minister and now head of the United Nations Development Programme (pictured), was the speaker at the official ceremony marking the opening of the renewed In Flanders Fields Museum in June this year. She spoke of Ieper and its environs having  experienced “the very worst of war and destruction.”

She said the peoples of even far away nations like New Zealand were deeply affected by what happened in Ieper and Flanders, but the story of recovery and of the determination to keep the memory of what happened there alive and to learn from it, was inspiring.

“The opening of the new In Flanders Field Museum marks another milestone in the remarkable journey of Ieper and reaffirms its place in the pantheon of communities dedicated to building and sustaining peace.”

Helen Clark spoke of driving through the peaceful towns and countryside of Flanders today. “ It is hard to imagine it the way it was for those who fought here. But the reminders are everywhere in the trenches preserved, in the meticulous story-telling of the area’s museums which interpret those epic events, and in the war cemeteries large and small which dot the landscape. Every name on the gravestones, every name of the missing on those memorial walls, tells a story of lives lost, dreams unfulfilled, homes never returned to, and grieving families.

The In Flanders Fields Museum presents the story of the World War I in the West Flanders front region. It is located in the renovated Cloth Halls of Ieper, an important symbol of wartime hardship and later recovery. The completely new permanent exhibition tells the story of the invasion of Belgium and the first months of the mobilisation, the four years trench war in the Westhoek from the beach of Nieuwpoort to the Leie in Armentières, the end of the war and the permanent remembrance ever since.

The museum says the focus is the human experience and calls particular attention to the contemporary landscape as one of the last true witnesses of the war history. In that context, a visit can also be arranged to the belfry from where you have a view over the city and the surrounding battlefields.

Hundreds of authentic objects, images, lifelike characters and interactive installations confront the contemporary visitor with his peers in the war, a century ago.

“The museum works from many possible perspectives The general and military- historical view is important, but also important is the relation with the present, our approach as humans and society to our past and that of all other countries involved. People from five continents and more than 50 different countries and cultures took part in the war in Flanders. Our public is diversified and extremely international.”