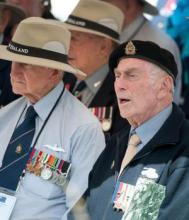 The New Zealand Governor-General Sir Jerry Mateparae has expressed the hope that young New Zealanders will visit war cemeteries.
He said, "as more young New Zealanders show interest in the deeds and sacrifices of their forefathers, they will visit not just Gallipoli, but also the battlefields and cemeteries of Europe."
He was speaking in Italy at the New Zealand National Service to commemorate the 70th anniversary of the Cassino Battles which has been marked in 2014. While 2014 is the centenary of the outbreak of World War I, it also marks the 70th anniversary of many important World War II battles and engagements.
Speaking of the World War II Italian campaign, Sir Jerry Mateparae said "tens of thousands of New Zealanders came to Italy to free the Italian peninsula from the yoke of fascism. They fought a stubborn and determined enemy, well-entrenched in defensive positions, who resisted every inch of the way. Some paid the ultimate sacrifice so that successive generations could enjoy a rich peace. The promise of their hope is reflected in the faces of the young people from New Zealand and Italy who are with us today.
"In the 1940s, most New Zealanders would have had a sketchy knowledge of Italian geography, but from the latter part of 1943 until February 1946, when the last of our troops left Italy, words like Orsogna, Castelfrentano, Cassino, Faenza, Rimini, Trieste, Padua, Sangro and Senio would become part of our vocabulary and part of our nation’s story."
In referring to the four fierce engagements around Monte Cassino from January to May in 1944, he said "Cassino was a particularly hard-fought and desperate battle where, despite heroic efforts and weeks of fighting, victory was to remain elusive for our men.
"American troops had mounted the first unsuccessful assault. In the second, involving New Zealand and Indian troops, the 28th Maori Battalion suffered particularly heavy losses in the attack on Cassino’s railway station. Only 66 men returned to the allied lines after the German counterattack, out of the 200 men who took part the assault.
"In the third battle for Cassino, our men and the supporting tanks struggled to make progress through the wilderness of bombed streets and enormous craters. After 10 days, as casualties mounted, the New Zealand troops were withdrawn. Some 464 have marked graves in this cemetery and another 55 are listed on the Cassino Memorial."
Sir Jerry said when young New Zealanders today journeyed to Italy, "they will find few traces of the Italian battlefields. Time and the march of progress have seen to that. But they will be able to retrace the footsteps of their tupuna, and feel their spirits walking beside them. They will be able to visit the beautifully tended cemeteries maintained by the Commonwealth War Graves Commission. They will take memories of those experiences home with them to pass on to their family and friends. And they will find that communities across Italy remember the sacrifices made by New Zealanders on their behalf.
"And as our young people see prosperous and bustling Italian towns and cities, they will be proud that their forefathers helped generations of Italians to know the peace that we also enjoy in our country."

My grandfather, Thomas, was an air-raid warden during the Blitz. He died in London.