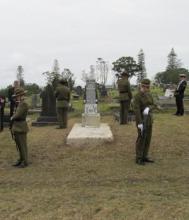 Third Engineer James was 27 and the son of Frank and Jane Mary James, of Puramchri, Takaka, Nelso